Bimini Road - who created it?

Bimini Road - who created it? 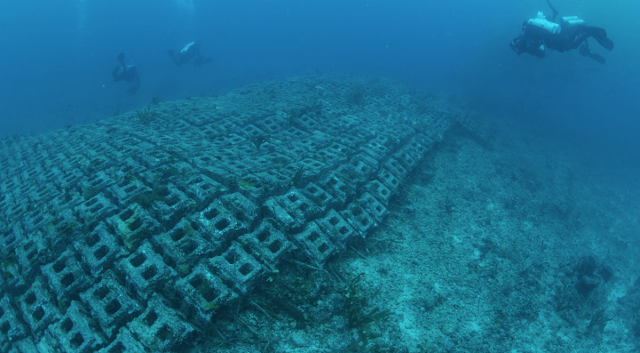 The Bimini Road, sometimes called the Bimini Wall, is an underwater rock formation near North Bimini island in the Bahamas.

Various claims have been made for this feature being either a wall, road, pier, breakwater, or other man-made structure. However, credible evidence or arguments are lacking for such an origin

On September 2, 1968, while diving in three fathoms (5.5 metres or 18 feet) of water off the northwest coast of North Bimini island, Joseph Manson Valentine, Jacques Mayol and Robert Angove encountered an extensive "pavement" of what later was found to be noticeably rounded stones of varying size and thickness.

This stone pavement was found to form a northeast-southwest linear feature, which is most commonly known as either the "Bimini Road" or "Bimini Wall".

The Bimini Wall and two linear features lying shoreward of it are composed of flat-lying, tabular, and rectangular, subrectangular, polygonal, and irregular blocks. Descriptions of the Bimini Road found in various books and articles greatly exaggerate the regularity and rectangularity of the blocks composing these features.

The Bimini Road, the largest of three linear features, is 0.8 km (0.50 mi) long, a northeast/southwest-trending feature with a pronounced hook at its southwest end. It consists of stone blocks measuring as much as 3–4 m (10–13 ft) in horizontal dimensions, with the average size being 2–3 m (7–10 ft).

The larger blocks show complementary edges, which are lacking in the smaller blocks. The two narrower and shorter, approximately 50 and 60 m (160 and 200 ft)-long linear features lying shoreward of the Bimini Road consist of smaller tabular stone blocks that are only 1–2 m (3–7 ft) in maximum horizontal breadth.

Having rounded corners, the blocks composing these pavements resemble giant loaves of bread. The blocks consist of limestone composed of carbonate-cemented shell hash that is called "beachrock". Beachrock is native to the Bahamas.

The highly rounded nature of the blocks forming the Bimini Road indicates that a significant thickness of their original surface has been removed by biological, physical, and chemical processes. Given the degree that these blocks have been eroded, it is highly implausible that any original surface features, including any tool marks and inscriptions, would have survived this degree of erosion.

Followed several different groups researching possible locations for the legendary Atlantis, one of which focused on the Bimini Road. Greg Little led a team of researchers on a dive to recover objects at Bimini Bay. Little and his team reported the discovery of an entire second layer of square-cut rocks with similar dimensions beneath the stones of the Bimini Road.

However, they have yet to formally publish in any detail the evidence and observations that demonstrate the presence of this underlying layer and the square-cut nature of its blocks. As a result, its existence remains unproven.

Little believes that his discovery suggests that the Bimini Road may actually be one part of an entire wall or water dock. He has also published an informal critique of Shinn's Skeptical Inquirer article.

The Bimini Road was also discussed in season 1, episode 10 of the TV series In Search Of, as well as season 4, episode 22 of the History channel's TV series Ancient Aliens.
#All articles #Ancient civilizations
Bagikan berita ini ke yang lain