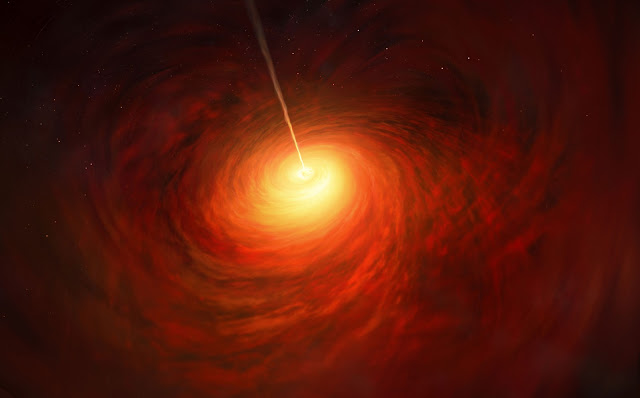 Most black holes are stellar - their masses are compared to those of stars. Stars are also associated with their origin: a massive star bursts into supernova at the end of life, and its central part shrinks and disappears beyond the horizon of events. The best current models of stellar evolution, confirmed by various observations, predict that the resulting black holes should not be more massive than about 40 solar masses.

Although stars may be larger, up to 150 times more massive than the Sun, during their lifetime they sink much of the mass by blowing strong winds, and in the course of a supernova explosion, much of the star's mass also lands.

However, the discovery of a black hole 70 times larger than the Sun's was announced last week. This black hole is found in our Galaxy. It forms a binary system with a fairly massive star one and a half times as far away as the Earth from the Sun.

The pair revolves around a common center of mass in about 79 days; it was the changes in the movement of the star that made it possible to determine the existence of a black hole and calculate its mass.

The question is how could such a black hole be formed. One possibility is the fusion of two black holes, similar to those whose gravitational wave signals are captured by LIGO and VIRGO detectors.

But in that case, there is very little likelihood that the third member of the system will remain in orbit because the black holes are pushed in some direction by merging and can very easily disrupt the polynomial.

Alternatively, the black hole ran into a very massive companion running around and ate it from within.

The existence of such objects has been theoretically studied for a long time, but we have not discovered them yet. Other, more exotic, origin stories are possible. This discovery certainly shows that very massive star black holes exist in our Galaxy, but the answer as they occur will still have to wait.
#All articles #Astronomy
Bagikan berita ini ke yang lain